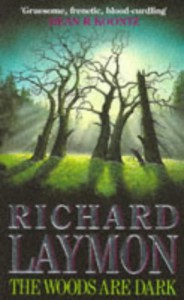 Lander got naked and ran through the woods.
Ben didn't make it. Didn't think he could.
Ruth was beaten, strung up to die.
Johnny tried to save them. It was suicide.
Cordie was initiated into the tribe.
Lost a finger, they would not be denied.
Sherri straddled the fence, she was bi.
Neala felt their friendship was a lie.
In the Woods, would they live or die?

Well, it started out fun then ventured into outlandish.
~Lander lost his mind a little too quick.
He was checkin' chicks out before he even found out about his "loving" wife.
~Johnny and Neala doing the nasty OUTSIDE while on the lookout.
~Sherri watching.
~Sherri's reason for watching.
~The story of the Devil.

It was fun to a certain extent and that's all I can say.